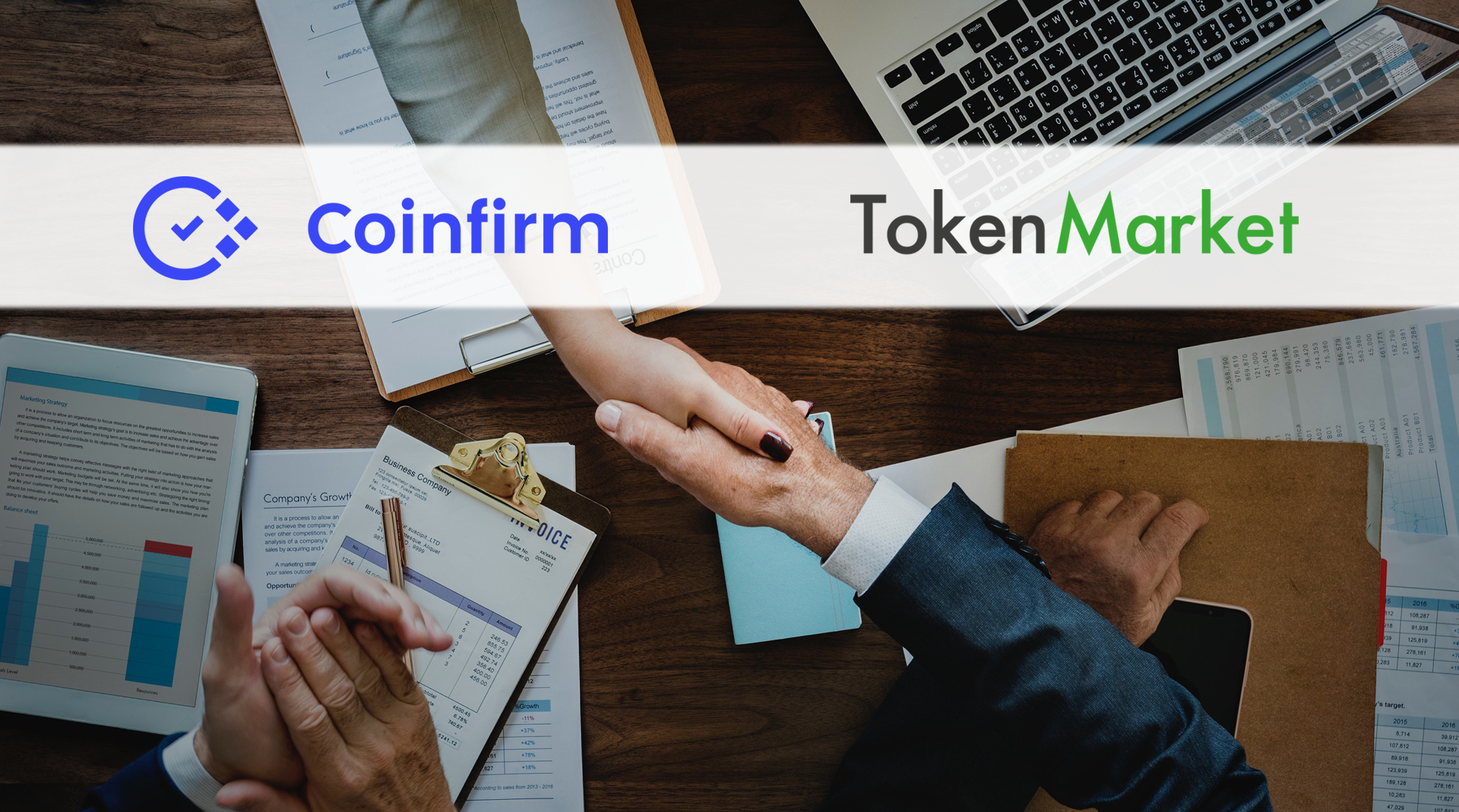 London, United Kingdom - May 23, 2018 - After the recent completion of its AMLT token sale, Coinfirm has on-boarded the first AMLT Network Member: TokenMarket. The AMLT Network was created to provide evidence for all actors in the crypto economy and help determine their further participation in the global financial system by illustrating their risk rating and in effect increasing the transparency and safety of the ecosystem.

This aligns with TokenMarkets vision for the future of the token economy as the AMLT network will enable the ability to detect then report fraudulent actors and actions related to crypto addresses, including phishing scams, counterfeit transactions and ransomware attacks. The service makes it easy to ensure token sales have fair global reach and buyers honest without need to resort to hard country blocks or other excessive measurements.

"TokenMarket and Coinfirm are long term partners. We both share the same values and vision for a sustainable, secure future of the cryptocurrency space. This natural progression will help improve the transparency and safety while creating a system that allows global economic participants to provide data on both good and bad actors in the economy. Now a user who has been a victim of ransomware has a system to turn to for example. AMLT and TokenMarket working together will further mitigate the risks of fraud and, most importantly increase security for all economic participants" - says Grant Blaisdell, co-founder of Coinfirm.

This system will help to address a number of issues such as financial inclusion and a fair analysis of honest market players deemed "high risk" due to region specifics. Further, AMLT Network Members will have access to high quality research, training and updates regarding AML as well as discounts to Coinfirm's AML/KYC Risk Reports when using AMLT Token.

TokenMarket is the first major Network Member onbarded as part of the AMLT Network, with many others lined up for integration before the end of the year. Coinfirm will grow the AMLT Network by onboarding members from sectors such as; wallets, exchanges, payments platform providers, e-commerce as well as traditional financial institutions.

"The blockchain promise is to do better than traditional banking world. AMLT mechanisms of data submissions and high quality risk data is a way to bring further convenience and transparency for transactions. This enhances security of not just cryptocurrencies, but web overall." TokenMarket CTO and Co-Founder, Mikko Ohtamaa stated.

The partnership aims to create a more streamlined process regarding the sharing of data in the crypto economy and in effect a global standard for AML for all blockchain based currencies. Coinfirm's AMLT Network, combined with TokenMarket's data input and knowledge base, will allow a ubiquitous insight into users financial reliability.

For more information on TokenMarket and its services visit https://tokenmarket.net

A global blockchain regtech leader, Coinfirm serves as a foundation for the safe adoption and use of blockchain. With users including major cryptocurrencies like Dash, ICO's, and banks, the Coinfirm AML/KYC Platform uses proprietary algorithms and big data analysis to provide actionable data and reports that increases efficiency, reduces costs and streamlines compliance to near automation. In addition, Coinfirm recently released their AMLT Token to allow for market participants to help rate good and bad actors in the economy, increasing safety, security, and democratizing the financial system.

TokenMarket is a premier ICO information portal and advisory firm. It combines its market experience, resources and data assets to create a professionally tailored solution to execute ICO's safely and securely, providing an end-to-end service for token creation, presale and public sale. TokenMarket's ICO advisory service has partnered over 30 token sales including Storj, Populous, Monaco, Civic and Dent, raising over $300 million in total. Which has led to TokenMarket hosting its own insights into the token economy conference in Gibraltar on June 28-29, 2018.