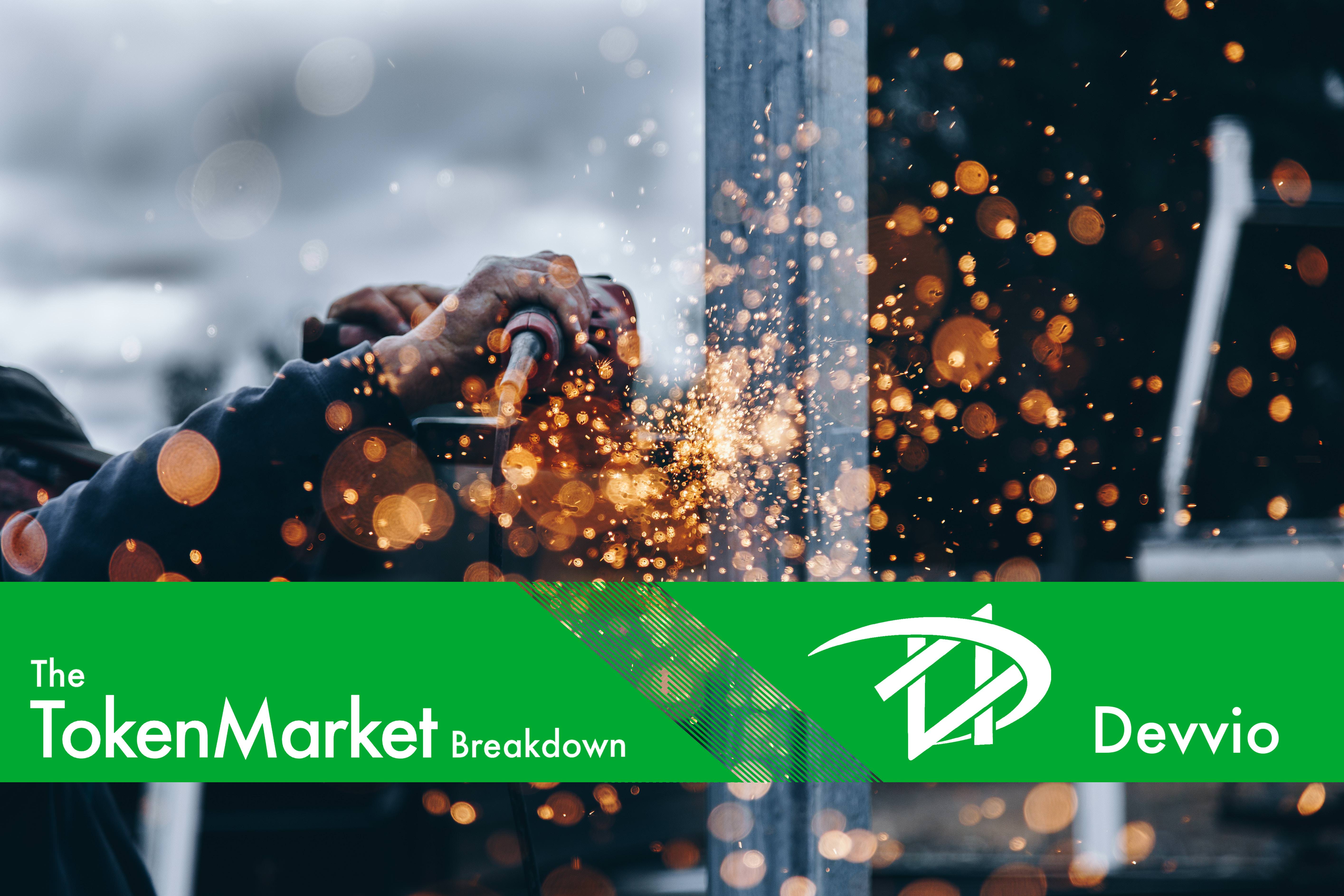 In this TokenMarket Breakdown Series, we’ll be deconstructing upcoming ICO projects to explain the technology, origins and uses cases of its blockchain in the real world.

In the first of our project breakdowns, we look at Devvio; an Albuquerque based team who have created the world’s most scalable blockchain.

One of cryptocurrencies’ major faults when it comes to mass adoption is the speed at which transactions can be carried out on the blockchain. Bitcoin is estimated to only be able to process seven transactions per second (TPS), Ethereum is able to process around 15 TPS, and Ripple, currently one of the leaders, processes 1,500 TPS. None of those solutions scale to the level that is needed for blockchain to be used in enterprise, institutional, and mass market cases. By contrast, Devvio has the world's most scalable blockchain.

In this project breakdown, we take a look at the Devvio project to show exactly what this industry changing technology will be able to achieve.

Whilst the technological advancement of blockchain is changing the way in which data and transactions are stored and monitored, there are still many problems that are keeping it from being adopted by mainstream industries.

For Devvio, we have highlighted four major problems that Devvio will be able to solve. In order to read the full list of problems make sure you read the Devvio whitepaper.

Cost - one of the biggest challenges for blockchain, comes from the desire to use it in real world solutions. The biggest barrier to enterprise adoption is cost. Right now, blockchain is just too expensive to actually implement in real world situations when compared to traditional database solutions.

Scalability - at the moment blockchain solutions are not capable of processing the needed transactions in order to become a primary database for enterprise use. In order for blockchains to be broadly adopted, the transaction throughput needs to be higher. Without assurances of scalability, companies cannot depend on blockchain as a solution for their business needs. And if blockchains are to reach mass adoption, transaction speeds need to be much faster.

Fraud, theft and loss - security breaches on the blockchain have led to billions of dollars in funds being stolen, such as with Mount Gox, BitFinex and CoinCheck to name a few. This is a significant problem, and until the issue of security and safety for users is addressed, blockchain will be limited in its adoption.

Privacy - privacy is critical to real world solutions. The majority of enterprise and financial blockchain use cases are simply not feasible without a good privacy solution. However, there is a second requirement other blockchain solutions have not addressed in their privacy solutions – that is government regulation. Governments do not want cryptocurrencies to be used for money laundering, illegal purchases, and terrorism. A privacy solution that provides true privacy, but one that also works within a regulatory environment, is needed.

How will Devvio overcome these problems?

The problems attributed to current blockchain systems are overcome by the Devv open source blockchain protocol. Devvio uses Proof-of-Validation, a consensus algorithm constructed to enable long-term governance and long-term scalability. The Devv Protocol has been specifically designed to combat the issues described above: cost, scalability, privacy, fraud, theft and loss.

Scalability - the Devv Blockchain has benchmarked at 8.1 million TPS. A video can be viewed in their blog post “We’ve Solved Blockchain’s Problems, But Nobody Believes Us (Yet) — Benchmarking Results At 8 Million Transactions Per Second” Devvio approaches the scalability issue with a sharding solution that uses many independent blockchain networks for scaling and a single blockchain network for implementing cross-shard transactions. Devvio’s approach maintains a fully functioning and consistent worldwide trustless blockchain, keeping all of the information secure.

Fraud, theft and loss - cryptocurrencies face a high risk of theft and loss. It is also an area with a great deal of fraudulent activity. If a private key is lost or stolen, then the cryptocurrency can be permanently transferred out of a user’s wallet. Using its DevvProtect solution, which is, in essence, a built-in escrow system, Devvio will be able to protect users from fraud, theft, and loss. DevvProtect is an optional feature of the Devv blockchain.

Privacy - private transactions are implemented via coordinate with Devvio, with a private transaction sent to Devvio along with an off-chain encrypted message describing the transaction’s implementation. This solution provides true privacy for an owner’s wallet but remains aligned with KYC and AML regulations. Devvio’s privacy solution can be thought of as true privacy, other than court ordered transparency. Devvio’s privacy solution is an optional feature of the Devv blockchain.

Cost - the Devvio Protocol, compared to most other blockchain projects, is extremely affordable to use. Devvio’s smart contract solution will be on the order of 1/100 000th the cost of DApps on the Ethereum platform. This solution gives businesses a viable, scalable and sustainable blockchain platform to use that will remain extremely competitive even when compared to any current payment platform in existence today.

The goal is for developers to implement scalable blockchain solutions quickly, easily, and affordable; a major factor in scaling business applications sustainably. All of this is possible when blockchain is used where it is needed, not used where it is not needed, where network expenses are managed, and where the foundation for growth itself is scalable.

The Devv Protocol has been designed to allow third-party developers to implement blockchain solutions in a more practical way than existing DApp-based blockchains currently allow. Current DApp blockchains introduce significant limitations and are far too expensive to implement in real world business environments. Devvio’s approach emphasizes maintaining only representations of value on the blockchain and leaving any non-essential processing to occur off-chain.

The Devv Protocol could be applied to a massive range of situations. Below are some ways the team and Devvio community has come up with, as well as an explanation as to how this technology and system might be used if you:

Currently, the project is in the second phase, meaning that they have completed their Proof of Concept. As of July 2018, the Devv Blockchain was benchmarking at over 8 million transactions per second on-chain, making it the fastest blockchain in the world as of today.

The code that runs on individual nodes for both T1 and T2 was implemented, as well as a test environment for implementing test networks and benchmarking. Initial coin implementations were designed such as Devv Cryptocurrency, Devvnero, voting coins, and data coins. An initial version of the API design was started for independent developers to implement their own solutions

Who’s Behind the Project?

The Devvio team is made up of business and new technology specialists. With decades of experience in industries such as emerging technologies, video game development, finance and investment.

Tom Anderson founded Devvio and is Devvio’s CEO. As an entrepreneur with years in creating innovative technology, Tom was one of the earliest pioneers in the field of Haptics (adding the sense of touch to Virtual Reality). Tom raised $34million for his gaming business Novint Technologies. Tom has decades of experience in creating pioneering technologies in varying fields such as virtual reality, computational intelligence and evolutionary algorithms, app development and Blockchain to name a few.

Ray Quintana, the President of Devvio, has over two decades of experience in venture capital, global investment, company creation, company building, valuation and strategic finance. Before joining Devvio full time, Ray was a General Partner and Head of European and Corporate Operations for one of the top performing early stage venture capital funds in the United States, The Cottonwood Technology Fund. Its investments were in technology-related businesses, such as chemistry/material sciences, photonics, biosciences, semiconductor and energy.

Nick Williams, is the Director of Blockchain Development and is an expert developer in the fields of cryptology and systems design. After receiving degrees in math and business from MIT, Nick spent over 10 years managing software development teams for a number of telcos and startups. He has extensive coding experience across many different domains. Nick’s perspective is shaped by a deep interest in cryptology, systems engineering, and business strategy.

Devvio’s Protocol has the potential to change the world of cryptocurrency and blockchain use. Having the capability to process over 8.1 million TPS is something that is unprecedented in this space. Devvio offers innovative solutions for all of the most pressing challenges in blockchain. It is not until all of these challenges are solved in a single solution, as Devvio has done, that blockchain can fulfil its potential as a technology and actually be used in real world applications.

To find out more about the Devvio project, be sure you visit its website, https://devv.io, as well as joining its social channels below: